You are here: Home / News / Book Reviews / The Backyard Beekeeper 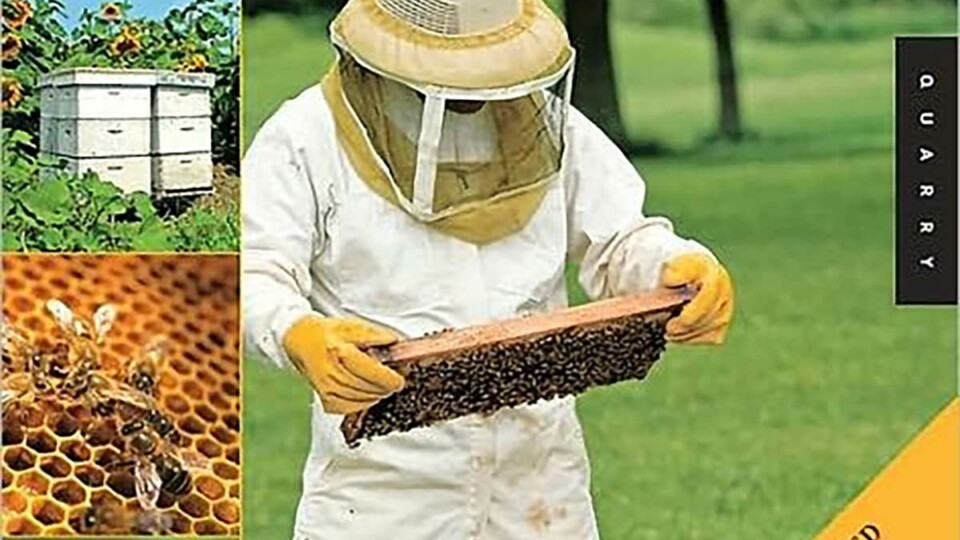 I believe that every backyard beekeeper should have a copy of this book, read it from cover to cover, and then keep it as a reference guide. I found some of the information to be material I already knew but there were many valuable new concepts that I learned. The author, Kim Flottum presents the material in an almost a conversational tone that makes it easy to read. Kim was the editor of Bee Culture magazine for 30 years and is interested in providing guidance and information to beginning, intermediate, and experienced beekeepers. The book has 207 pages, 5 chapters, a glossary and an index. There are also many photos and diagrams. In this review, I plan to highlight some of the points that I thought were important and things that I learned.

The author begins the book with a chapter called “Starting Right.” He offers a good discussion on where to locate the colony, getting and assembling the right equipment and where to get bees. He also offers a few facts about the different races of bees. Kim thinks that the Russian bees offer the best resistance to Varroa mites. It is estimated that there are approximately 10,000 bees in a 3 pound package.

Chapter 2 is entitled “About Bees.” I was reminded that a queen can be produced in 16 days, a worker in 21 days and the drone, 24 days. All the larvae are fed royal jelly for at least part of their development. It is also interesting to note that honey bees are not aggressive by nature but are considered to be defensive. We need to keep this in mind when working our bees. We don’t want our bees to believe that they have to defend the hive against us when we open them up. With respect to nutrition, pollen is the only source of protein, starch, fat, vitamins, and minerals that the bees have. In fact, by weight pollen has more protein than beef and is the best food for a developing brood. The honey serves as a source of energy for working bees and of course in the development of queen, workers and drones. The stored honey also gets the colony through the winter. The author writes about the importance of water to a hive. He estimates that a full size colony will use an average of one half to a full gallon of water in addition to the nectar it collects on a warm day. This emphasizes the need for a good supply of water near the hive at all times.

It was stated in Chapter 2 that a colony can starve during the winter for only two reasons: lack of food or not enough bees. In New Mexico, it is estimated that a hive should have at least 50 pounds of honey at Thanksgiving time. If there is ample food but not enough bees in the hive, the colony may die because when clustered during cold spells, the fewer bees are not spread out enough to access the honey. Another concept, I was not aware of is the Nasonov pheromone. This is produced by worker bees, not the queen. Apparently, the Nasonov gland is located between the last two segments of the worker bee’s abdomen where the Nasonov pheromone is produced emitted as she rapidly beats her wings. Each colony’s worker bees all have the same characteristic smell which identifies them as being part of a particular hive. I think we were taught that the queen emits the pheromone which is then picked up by the worker bees. I will quote the following paragraph, which I found to be very poignant:

“What you’ll notice most, though, is that when you open a colony, the natural upward ventilation, partially driven by the body heat of thousands of bees, wafts up the commingled, subtle aromas of curing honey, stored pollen, and a good bit of Nasonov pheromone. This cocktail produces the distinct smell of a beehive. This is what makes all colonies smell mostly alike, but all a bit different. There is no other aroma quite like it or quite as attractive, to both a honey bee and a beekeeper.”

In Chapter 3, the discussion is “About Beekeeping.” The chapter starts out with how to not only light your smoker but keep it going for as long as you need it. A nine step process was outlined that I am going to try the next time I work my bees. I will summarize the process here. The author’s of choice of fuel is paper, pine needles, and punk wood. He starts by crumpling newspaper into a loose ball that doesn’t quite fit the smoker and lighting the bottom. He then lets the paper ignite and pushes the paper to the bottom of the smoker with his hive tool. He then adds a pinch of pine needles to the top, pushes the bellows and let the needles catch fire. He adds more needles, pushes them down, pumps the bellows, and adds a third batch of needles and repeats the process. Finally he adds wood pulp or some other more durable fuel, pumps the bellows, and when lots of smoke is billowing, drops the lid down. When properly lit, the smoker should be able to sit idle for a half hour without going out. The rest of the chapter is about packaged bee management and introduction, honey flow, record keeping, summertime chores, inspecting the hives, fall and winter management, and early spring inspections. This chapter is really the nuts and bolts of beekeeping. A couple of specific recommendations was keeping the queen in her cage for 5 to 7 days before releasing her and observing worker behavior toward the uncaged queen. The author also recommends cleaning tools and gloves when finished with a hive inspection. Better yet, one should clean tools in between opening hives. Disease control is emphasized with particular attention paid to controlling Varroa mites. The information in this book about controlling mites is very similar to what we learned in class. The same sampling techniques and control measures are recommended that we learned in the certified bee program. The latter part of the chapter was on harvesting, fall and winter management, and spring inspections. With regard to winter feeding, I was intrigued by the idea of feeding fondant, which is a mixture of sugar and high-fructose corn syrup. It is placed in between the frames so that is readily available to bees in winter when they are in their cluster. It has a solid consistency about the consistency of butter. The author says you can get it from bakeries but it sounds easy to make.

Chapter 4 is all about beeswax. The chapter starts off with the the cardinal rule, “Never melt beeswax over an open fire.” Instead, melt the wax in a double boiler. There is also a section on solar melting of wax. There is quite a lot of information on making candles, lip balms, foot cream, etc. The author points out that there are different types of wax depending upon its age and where it came from in the hive. One should be careful not to mix the waxes depending on what you want to use it for. Burr and new comb creates nearly white wax. Capping wax is lemon colored and darker wax comes from older brood combs. The darkness comes from propolis and the debris which makes candles burn erratically. This wax can be used in making soaps, polishes and for waterproofing. According to the author, only the dark waxes should be melted in a solar melter because high heat can also lead to a darker wax. Lighter colored waxes should be melted in double boilers where the heat can be regulated. These lighter colored waxes are then good for candle making, lotions and other balms.

Chapter 5 details the author’s Rules of Modern Beekeeping. The rules start off with queen’s rules: raising the queen in luxury, queen must be well mated, and queen must be productive. Then, there is discussion on bee’s rules: adapted to environment, selected on beekeepers management style, resistant to pests and diseases, and well behaved. There is a rather lengthy set of rules that beekeepers should practice ranging from being aware of all pests, to isolating your bees from other bees, to keeping records, and being a good steward of the hive. The author is adamant about controlling Varroa and says that every beekeeper should consider the following steps: “1) Learn about Varroa, 2) The best way to control Varroa is the worst way to make honey, and 3) Use IPM treatments first, soft next and hard never.”

The author concludes the book with the following quote, “Keeping honey bees remains one of the most interesting, productive, and challenging hobbies or businesses that exists. I’ve been at it for more than thirty years, and I still learn something new every season, and I’m still having fun in the process. You will too. Enjoy the bees.”

As I stated earlier in this review, in addition to a detailed, how to do discussion, there is also a fairly complete glossary and an index. I think this book should be in every beekeeper’s library. I highly recommend it to my classmates and every one interested in the keeping of bees.